Why help refugees when Canadians are homeless?

Posted on January 7, 2016 by abeoudshoorn 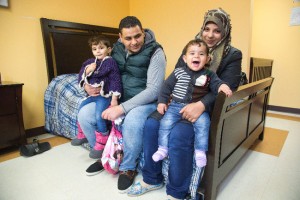 Discussion of the Syrian refugee crisis was common around family dinner tables over the holiday season. With the new Canadian Government working quickly to fulfill their election pledge, communities across Canada are beginning to receive their first government sponsored refugees. I have decided to make my New Year’s resolution this year to raise $2500 for settlement of Syrian refugees in London. To many this seems counter-intuitive given my role as Chair of the London Homeless Coalition, as their lead argument is ‘why help refugees when Canadians are homeless?’

Although this seems like a straight-forward either/or question, there are several factors to consider. Firstly, should Canada even take refugees? In my mind, there are two key reasons why we should. 1) Canada’s position of respect in the world is largely based on our stance as being a multi-cultural nation with borders open to all peoples of the world. Both my father, and my grandfather on my mother’s side, are immigrants to Canada, just two of the people who bring mix to our diverse society, so I’m particularly thankful for their journey to this country. As Canadians, we have a long history of accepting refugees from conflict situations, and I have had the privilege of serving as a nurse with some of these families. 2) From a pragmatic position, Canada depends on immigration to maintain an economically important level of population growth. Closed borders would equate to stagnant or declining populations, which are catastrophic for GDP-increasing economic activity (take a look at Detroit on Google Maps satellite view to see impact of population decline). We need to keep the borders open to grow our communities especially as our population ages.

Secondly, in my mind the various activities government take part in, such as public safety, infrastructure, health, education, immigration, and homelessness, are not mutually exclusive. That is, accepting refugees does not mean we can’t continue to do better on homelessness. And we are doing better. In particular, we are getting better at helping people move from homeless to housed. This is crucial to me, as when I worked as a nurse with people experiencing homelessness I was eternally frustrated that I could assist people with their health needs yet they remained homeless. With new models of Housing First we are doing better at the back end of the system, helping people exit homelessness, though I do wonder about the front end (ie. the number of new people becoming homeless). We can end homelessness and help integrate new Canadians from Syria at the same time.

Which leads to my next point: a general skepticism that those making these remarks are truly invested in assisting people who are experiencing homelessness. Are individuals expressing this concern subsequently lobbying the government to invest more in homeless services? Are they volunteering time with or donating to homeless-serving agencies? Are they voting for governments that will expand the social safety net to prevent and reduce homelessness? Or are they tapping into a nationalism that actually ends at the tip of their own nose? I ask, because it seems that some of the same individuals complaining about Syrian refugees and suddenly seemingly being concerned about the homeless, have in the past complained about homeless services as being a waste of money.

My final thought on the issue is that it is truly up to us as a community to determine how much of a benefit this migration is to our city. If we accept people, if we welcome them, if we grant them opportunities, and if we extend the same neighbourly support that we, or our parents, or grandparents, or great-grandparents received on coming to Canada, then we will gain exponentially back as Londoners.

If you want to be a part of this welcome, please consider being 1 of 50 people donating $50 to support settlement of Syrian refugees in London.

3 Responses to Why help refugees when Canadians are homeless?