Tracing back the Dominoes 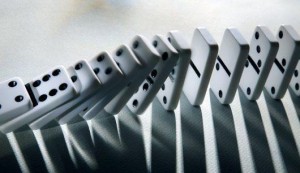 I work closely on a number of projects with Dr. Cheryl Forchuk, and much of her current work focuses on youth homelessness.  I was quoted in this news article talking about some of the root issues and key challenges of youth homelessness.  In the work that I do looking at policies and homelessness mostly with adults, the majority of them trace their life stories back to a tipping point, a time when things went downhill and since which they just haven’t been the same.  For many, this is the point at which they left school (willingly or not).

However, the end of school is often only one domino falling in a long line.  After the school domino falls, there are often others that come down, such as starting to use substances, which makes it harder for people to exit homelessness.  And, on the other side, the dominoes that knocked out school are often leaving home, precipitated by family conflict, precipitated by either poverty, abuse, mental illness, substance use of parents,  separation/divorce/marriage, or all of the above.  So, the lack of an education can doom a youth to poverty, but far before that was what is often a lifetime of family conflict in the (former) home.

This has significant implications for how we organize social services.  Getting into the home to help people, or surrounding people with supports through the school system, is very difficult.  It is actually far easier to create a drop-in for homeless youth than to try to prevent family conflict.  In terms of upstream versus downstream services, this appears to be one of the hardest.  However, if we could support children and youth we would be preventing substance use, mental illness, poverty and homelessness, and assisting with education and employment.  The big question is: How do we intervene?