Posted on August 8, 2012 by abeoudshoorn 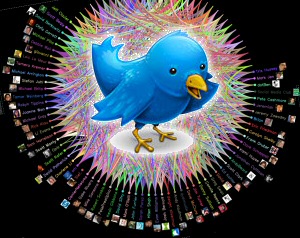 This post is going to be rather specific for some, it’s really just about London, Ontario and Twitter, so apologies if neither of these apply to you.  However, twitter is very important to me, not just in that the most access to my own professional work comes through my blog, and most traffic to the blog comes from twitter, but also because I use twitter for my personal life to engage with my city.

And in London we do have something special with twitter.  This is admittedly anecdotal, but friends and work acquaintances from other cities do not have the same stories of how twitter has grown the cultural engagement in their cities, the municipal pride, and the political action that we have seen in London.  Twitter has allowed, in London, for the building and bridging of social networks in ways that even the more adopted Facebook (900M active users versus 500M) has been unable to achieve.  The majority of new friends from London I have made in the past few years has been through virtual mediums.

That said, it’s not necessarily all butterflies and roses.  Like any community, twitter can easily devolve towards a school-yard style mess of grudges, rumours, factions, accusations, insults, and open conflicts.  However, I am hesitant to say that it is an ugly scene in terms of the social relations, or that it isn’t, because all I ever see of twitter is my twitter, a feed representing those I have followed.  My impression of a trend, a style, or a bias is in itself incredibly biased by who I follow, and who I have blocked.  An actual study of a total population sample of London-based twitter users would be fascinating, but until we have that data, I caution against painting things with a broad brush, dipped in one’s own narrow lens.

The twitter that I see is my twitter, and it’s my choice as to how I use it.  Until very recently I tried to limit those I followed to those who I felt I ‘knew’, whether that is from having met them personally, or at least engaged with them online.  Valuing the friendships built, I followed in the same style that I ‘friend’ on Facebook.  However, being too curious of half conversations, I have followed more and more people recently.  This comes at the expense of having to browse through more tweets that I don’t find particularly personally interesting, but perhaps these things go in waves.  I unfollow people for any number of reasons, be it quantity of tweets, quantity of retweets, stuff that just doesn’t interest me, stuff I consider unpleasant, or simply because they haven’t tweeted in a while.  That people care who I follow I consider a compliment, but also a bit of an intrusion into my choices of managing my time.  For blocking, my current policy is I might block someone if they @ me with something particularly offensive (understanding of course that offense is very subjective, and they might not have meant it).  Disagreeing with me is great, attacking me is not so much.

That, however, is just how I use my twitter.  It isn’t right, it isn’t wrong, it’s just my style.  And for tweeting, I make no claim to sainthood, but I do try to keep it positive, or if critical, at least measured and informed.  This has been a learning process, and I have had great mentors willing to DM me with suggestions, which I appreciate.  For others, it’s their own twitter, and their own prerogative as to how they use it.  It takes all kinds, and you can certainly find them without looking too hard.  There are the strong partisan political types, Conservatives, Liberals, NDPers, and Greens who blow their horn and bash the other guys.  From each party I follow some, and I avoid some.  There are the low filter types, tweeting from the heart, whether its rude jokes, curmudgeonly comments, strange reflections, or streams of emotion.  I follow some, I avoid some.  There are big egos, there are big insecurities, there are direct arguers and there are passive-aggressives, there are the endlessly positive, and the hopelessly negative, and there are countless pictures of cats, kids, and dinners.  And that’s their choice, not mine; my choice is how I pull this fascinating network of humanity together for my own observation, and what I choose to add to the mix.

Now, this is not to say that we should be careless in our comments, and behave however we choose, leaving it up to others to screen us out.  Quite the opposite, I would suggest that in this human adventure we are to do more good than harm, and each keystroke can be a part of that.  Positivity will always be greater than negativity.  Kindness will always be greater than emnity, inclusion greater than exclusion, and turning the other cheek greater than revenge.  We need to be acutely aware of what we are bringing into the community, and if we are building or tearing down.  And when only 140 characters are available, so much is perception, which should lead us to be hyper-aware.  Joining in a debate can be seen as ganging-up, a back-and-forth debate can be perceived as an argument.  A single insult can be your only tweet someone sees.  Pointed comments with no name as the target can be read by dozens as referring to them.  A comment you make can be interpreted as the opinion of your friends.

We are at a critical moment here, where we have something special in our community.  However, as it rapidly grows and evolves, and as this is new to all of us, it is going to be whatever we make it.  If we say there is a right-left divide, then this will become a self-fulfilling prophecy; if we say it`s a place of bullies and factions, then this is what we will get, and it won`t be pretty.  Because there is no clear line in the sand, thank goodness, and if it`s the direction we go there will be casualties along the way.  This was highlighted well in Lincoln`s post where he stated, “I should add here that if I end up being conservative or ‘right-wing’ in any way as a result of this entire shit-show I will never forgive any of you.“  Instead, let us each attend to our own behaviour, let`s allow each other to do twitter in our own way, but let`s also respect that each of us has an impact on the entire London twitter community.

5 Responses to It’s Your Twitter, and It’s Everybody Else’s