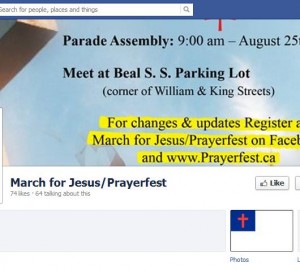 Religious issues, of course, are incredibly touchy.  It has been stated that you avoid discussions of religions and politics to be good company.  However, as I cover politics in depth, why not tackle where politics and religion interact?  Many may have heard of the Christian flag at City Hall issue, and for more information I refer you to the London Free Press article linked below.  I chose to write to the City Clerk Cathy Saunders as she stated that she would follow-up if public concern was expressed.  I want to be clear that I am not against religious groups holding events, and wanting this recognized formally by the City, but I believe that the particular individual involved does not pass the test for the City to accept such a request.  Public outcry on this should not be seen as persecution of Christians, but as a reminder that regardless of your faith you must show respect to all.  In fact, this seems like a message that should resonate quite well with those of the Christian faith.

I’m writing in response to the issue of the flag raising at City Hall for the event organized by Mr. Rancourt.  As stated in this article in the London Free Press http://m.lfpress.com/news/london/2012/08/19/20118251.html the test for flag raising is “Flags (are) barred from political or commercial groups or those whose philosophies espouse hatred, violence or racism”.  In the same article Mr. Rancourt is quoted as stating that “90,000 (Canadian Muslims) believe in Sharia law, jihad and terrorism,” which in my mind fails to meet 2 of the 3 conditions.

I fully support the raising of flags to recognize various cultural, ethnic, and religious events and groups in the City, but our guidelines are there for a reason.  Unfortunately, what could be a good event for the City, has as it’s spokesperson someone who promotes hatred and racism.  Fly the Christian flag for such a day, but not at the request of Mr. Rancourt.

And just to clarify the comments of Councillor Henderson, the March for Jesus and other events of that day are explicitly Christian, not inter-faith.  There are many other inter-faith prayer events in London.

1 Response to Faith and Flags