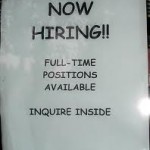 Although the 0% with no cuts to core services has proven to be the campaign promise made by Mayor Fontana that has garnered the most press, his other promise to create 10,000 new jobs over 5 years should prove to be interesting, not just because the promise is longer than his term as Mayor.  This should prove to be interesting because it will defy easy calculation and could be spun all kinds of different way.

If we take these rates and extrapolate them forward to October 2014, the date of the next election, London and area will have ‘created’ 46,416 new jobs, yet will also have 7,296 more people unemployed.  So, the unemployment rate can get worse while we are actually adding employment to the community due to population growth.  You can then see why the 10,000 job promise is perfectly safe where critics might say, “Unemployment has actually gotten worse”, the Mayor will be able to point to far more than 10,000 newly employed persons in London.  I’ll leave the discussion of whether the Mayor created these jobs or not to the media in 2014.

EDIT: Someone who commented on this post, who is clearly better with employment stats and the StatsCan website pointed out that I inadvertently used adjusted numbers for one year, and unadjusted for the other.  From this combined table http://www5.statcan.gc.ca/cansim/pick-choisir;jsessionid=6587477913245801B7A656AFD8A6AA5E it appears that using better apples to apples comparisons we have added 9,200 jobs to date, but have 900 more unemployed, and unemployment rate has gone from 8.5% to 8.6%.

2 Responses to Employment Calculations are Tricky