Posted on January 2, 2013 by abeoudshoorn 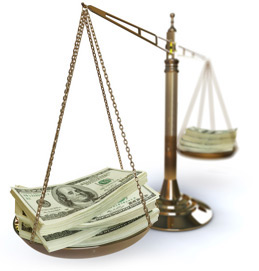 I have thoroughly critiqued the 2013 London Municipal Budget, so it’s only fair that I offer an alternative.  In fact, I have been asked repeatedly, “What percentage increase would you propose if zero is a bad idea?”  The simplest answer would be to just go with the proposal by the City’s Finance department.  However, I have already highlighted that this comes with increased debt, so I believe there is a more nuanced approach available that both addresses spending, while ensuring the programs and services exist for London’s most vulnerable citizens.  In addressing this, I hope to present how someone can be fiscally conservative, and progressive, and socially liberal.

Before tackling London’s situation, however, I believe a primer in governments and budgeting is useful.  To this end, the current ‘fiscal cliff‘ in the U.S. provides an excellent example of challenges faced in public budgets.  On the revenue side, Bush era tax cuts are set to expire meaning an increase of $388 billion in tax revenue.  At the same time, spending is set to be reduced by $172 billion.  This would mean reducing the federal deficit from the current level of $1.1 trillion to $641 billion, a reasonable goal for a government currently approaching $16 trillion in debt.  This is all well and good, but it means removing $560 billion from the economy, reducing GDP by -0.5%, and pushing unemployment over 9%.  It would lead to deepening of the ‘Great Recession’, which already shows no sign of ending.

So, what to do?  I believe that the U.S. should go ahead with the full proposed elimination of tax cuts and elimination of spending.  Yes, this would mean some pain in terms of decreased household incomes, but the changes are very strongly scaled to income so that those in poverty would see little difference, whereas the top 10% of income earners would see a much bigger impact.  To instead continue to borrow to avoid the fiscal reality means not just delaying the inevitable, but actually making the crash worse when borrowing runs out.  We would have to come up with a new acronym to replace PIGS.  To be fiscally conservative means that when times are tight, we live tight, otherwise your debt to GDP ratio starts to look like this.

Closer to home is the Ontario budget and deficit, which were very well unpacked in the Drummond Report.  I have written about this before, and in my fourth key principle highlights the opinion that governments need to get out of playing Santa Claus, giving out money to everyone to garner support.  In the Drummond Report this includes water subsidies, hydro rebates, tuition rebates, and corporate subsidies/rebates (referred to at times as ‘corporate welfare’).  Local economist Mike Moffat highlights that corporate welfare (and GST reductions, but that’s another discussion) limits government’s ability to provide the programs required to reduce income inequality.  If governments reduce deficit spending and are willing to tackle both revenue and expense sides of budgets, they will actually have more resources to put towards those most in need: fiscally conservative, socially liberal.

The current London budget represents the exact opposite of what I consider good budgeting: reducing debt while enhancing programs that meet the needs of the most vulnerable.  There are areas where we need to start paying true costs, and there are areas where we need to stop giving money away.  However, there are also areas that I believe require more resources.  I will outline this proposed better budget in my next post.